John Swift is a builder in the West Riding of Yorkshire, where being a builder necessitates being a mason. He was building a stone extension to the home of Andrew Bramley, a financial advisor, when they both decided to sign up for a City & Guilds stonecarving course at Calderdale College.

“I’d taken ‘A’ level art at school but hadn’t done anything with my artistic side until I went on the City & Guilds course at the college with Andrew,” says John. 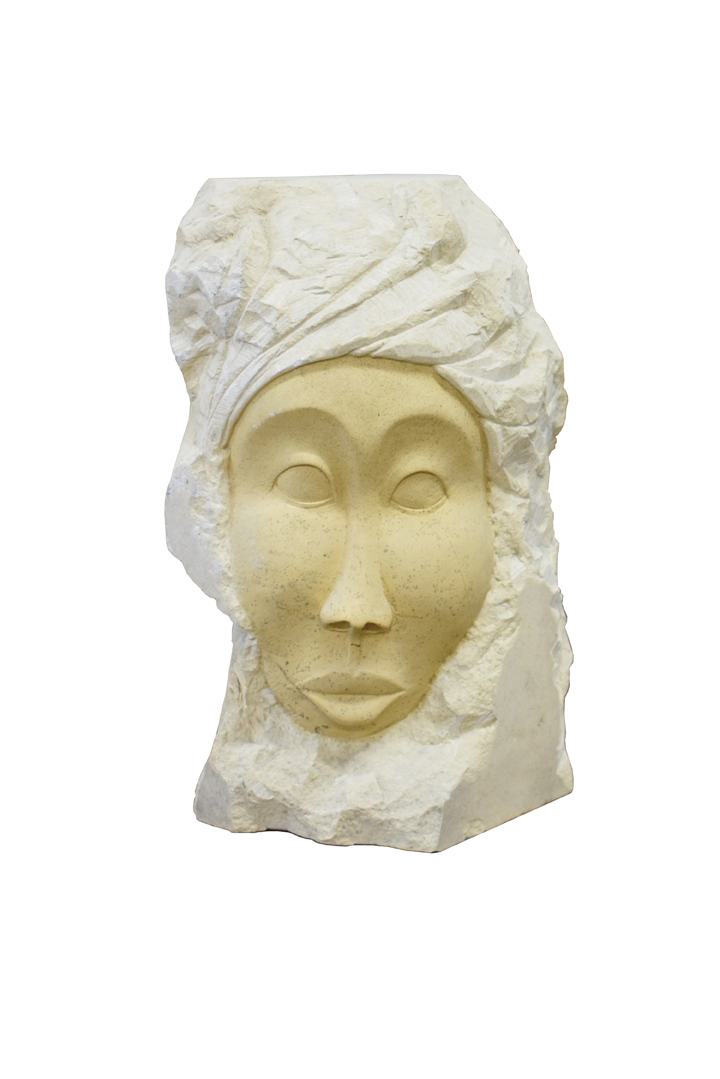 After three years, when John had completed his levels two and three in carving, the college decided to end the course. But John  and Andrew did not want to stop there. Instead they formed their own stonecarving training centre – the West Riding Stonecarving Association. They bought the bankers and tools from the college to get started.

In March, that Association celebrated its 10th anniversary with an open day at its workshop in the Shaw Lodge Mills centre in Halifax, where some of its members demonstrated their skills to visitors who accepted the open invitation to come and have a look at what the carvers get up to.

Those visitors included the Mayor of Halifax, Cllr Dot Foster, who spent a long time admiring the works that have been produced and talking to the carvers about their love of the art. 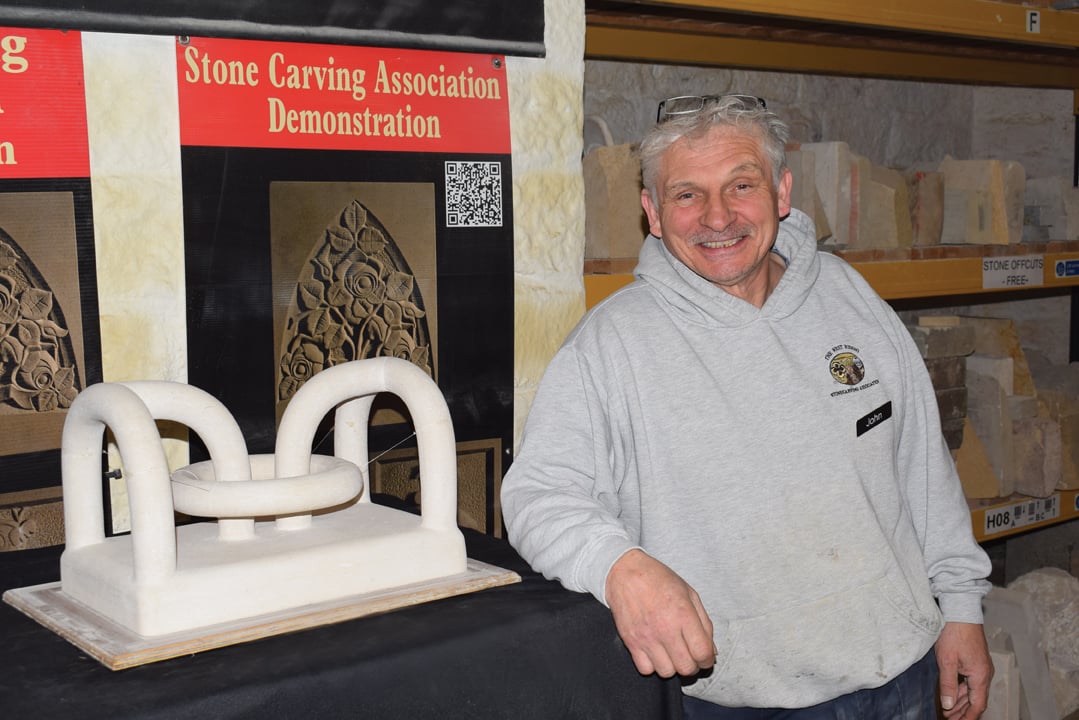 Some of the visitors during the open day signed up to the free taster session that is offered to anyone thinking of joining the Stonecarving Association, so they can be sure stonecarving is for them.

When they moved into the Shaw Lodge Mills Centre, previously used to manufacture the moquette cloth used to make the hard-wearing seat covers on buses, trains and aeroplanes, it was not in tip top condition. There was even rain running down the Yorkstone walls but the rent was £50 a month with £3 added for each additional member that joined (membership fee is £20 a month). The rent now being paid is £360 a month. 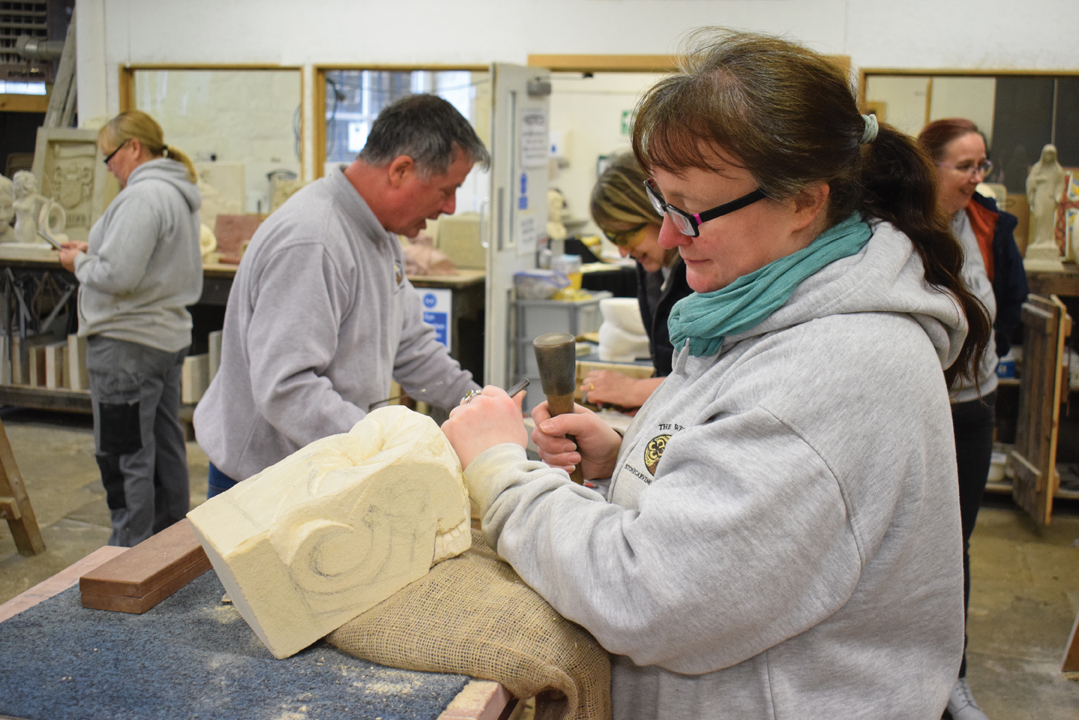 Nancyann Marshall working on her doorstop doodle gift for a friend.

The building skills of John and some of the others members of the Association have considerably improved the facilities, making the building weather tight, putting in lighting and adding offices and a toilet.

Another member of the Association, who was a joiner, supplies the bankers that have been added to the 15 bought from Calderdale College, most of which are still in use. The hand tool makers G Gibson & Co and RH & G Travis & Son, both in Yorkshire, have also always supported the Association.

The intention was always to make stonecarving and lettercutting accessible to everyone, not just to those who already have some knowledge of stonemasonry. 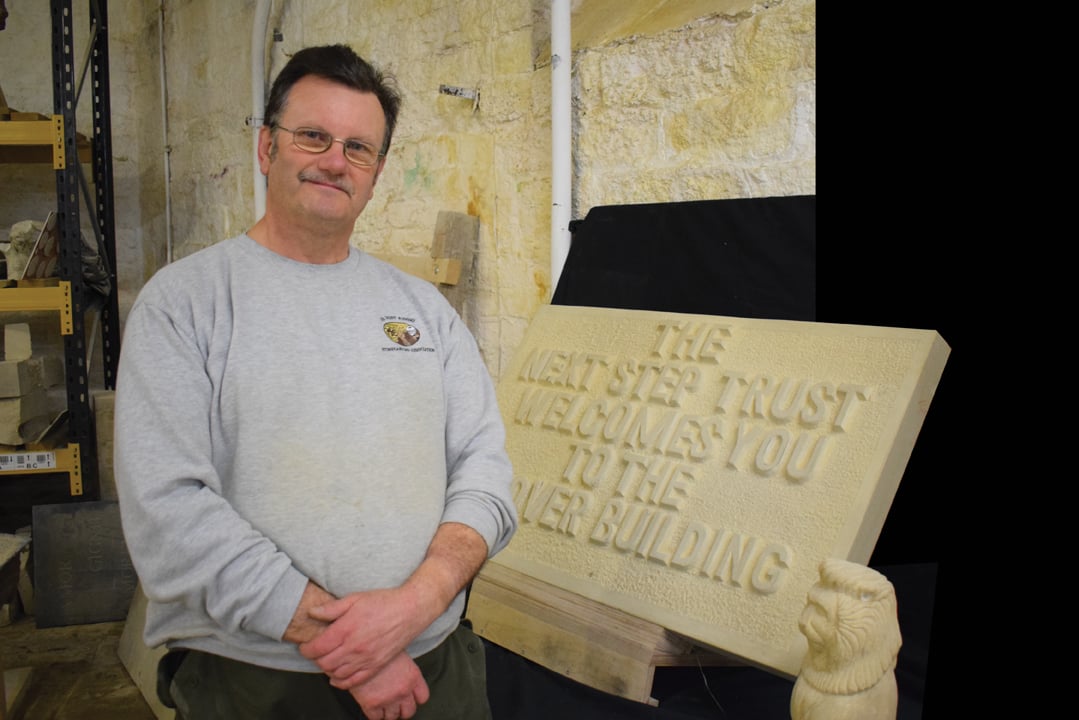 Peter Stott, one of the parents of autistic people who has formed the Next Step Trust charity, with the welcome sign he has carved for the charity’s premises.

“I find carving a real de-stresser,” says Barry Snarr, who these days helps with promoting the Association alongside John, his sister Helen Jukes, a qualified tutor and secretary of the Association, and Colin Marshall, who is the treasurer.

When students join up they are shown how to use and look after the tools they need for carving – and it is all hand work, which minimises the dust and noise and reduces the risk of vibration injuries. 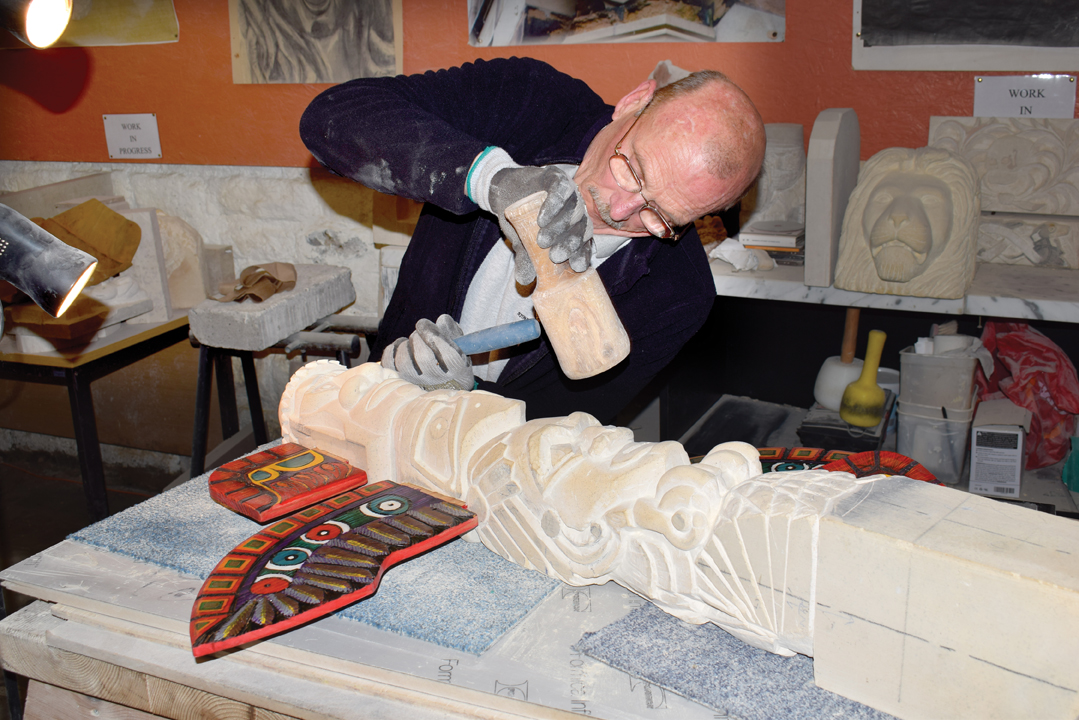 Much of the stone used is Tadcaster magnesium limestone, which has negligible silica content, although, of course, masks are given to the students. Tadcaster is one of the stones regularly used for the maintenance of York Minster. Barry Snarr says if any quarry operators feel inclined to donate some of their stone to the Association it is always grateful.

Among the members of the Association showing off their skills on the 10th anniversary open day was Peter Stott, one of the parents of autistic children who established the Next Step Trust in 2006 to support adults with learning disabilities and complex health needs, providing a comprehensive day service and other services as required by the individuals supported by the Trust. Peter had carved a sign welcoming people to the building that houses the Trust.

Another of the students was Nancyann Marshall, carving what she described as “a doodle in stone” to act as a doorstop as a present for friend. And John Bolland was working on a totem pole, which also incorporates carved and painted wooden elements, as the latest of his garden ornaments representing cultures from around the world. When it is finished it will join an Aztec owl and an Egyptian cat in the garden of his home. 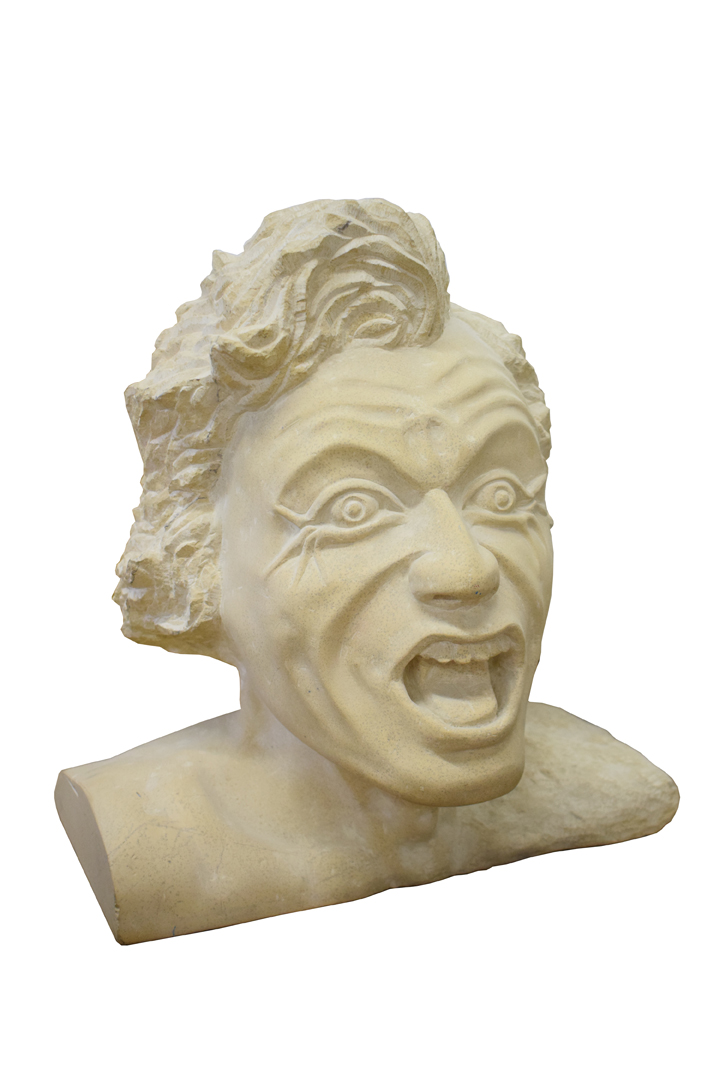 Several of the carvers from the West Riding Stonecarving Association have taken part in and won prizes at the European Stone Festival (including Nancyann Marshall who was third in the apprentice category last year).

Barry Snarr and John Swift intend to attend this year’s European Stone Festival, due to take place in Freiburg, Germany,
15-17 May (although it may yet be disrupted by the Coronavirus). And in 2022, they are scheduled to be hosting the European Stone Carving Festival at the multi-award-winning Piece Hall in Halifax.

The first stone festival at Piece Hall was in 2018. It was organised by Joe English, who is a member of the West Riding Stonecarving Association and was the apprentice winner of the European Stone Festival in 2016, but subsequently became quadriplegic as the result of an accident. He formed a charity called Quad-Rebuild, and the stone carving festival at Piece Hall, with several members of the Stonecarving Association taking part, was to raise money for the charity.

The European Stone Festival at Piece Hall in 2022 will also be used to raise money for the Quad-Rebuild charity. 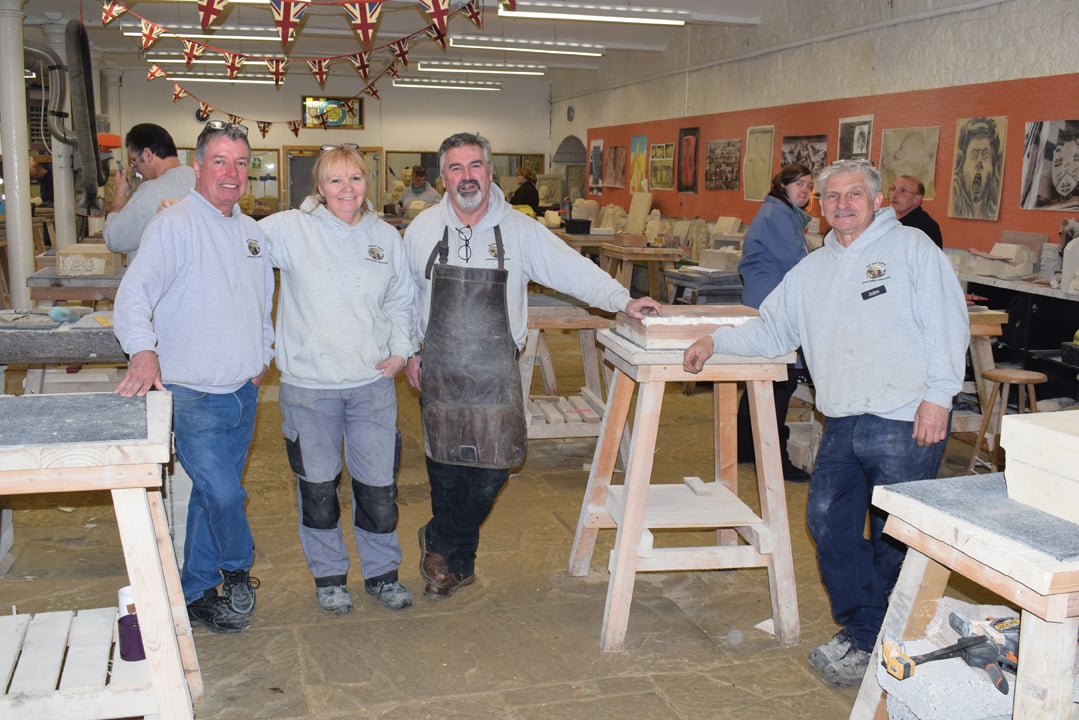