When it comes to stone, Harrison Goldman has every detail covered

The consultancy practice of Harrison Goldman sees itself as the marzipan that sticks the icing to the cake – or in its case the stone to the building.

The consultancy of Harrison Goldman has been the unsung hero of some of the most prestigious stone projects in the UK for the past 26 years, ever since Peter Harrison and Mark Goldman formed the company that bears their surnames with the intention of resolving some of the concerns architects, developers and clients sometimes have about using stone.

In those 26 years, in spite of the protracted downturn in construction that stretched on for the first half of the 1990s and the crash of 2008/09, the stone market has grown more than six-and-a-half times faster than inflation – and that does not include all the large format quartz, ceramics and sintered stones being used these days, mostly for worktops. Harrison Goldman has played its part in that growth by taking some of the mystery and uncertainty out of the use of stone, especially on modern, fast-track projects.

For the most part, ‘stone’ is an ideal building product for cladding, wall linings, floors, paving, interiors… all the various uses that are made of it. But stone comes in many different guises and not all stone is ideal for every application.

For people who do not know much about stone, this can present a problem. And there are few people in the stone industry who are actually prepared to stick their neck out and take responsibility for the stone being used. Possibly that is judicious because there are a lot of stones used from all over the world with more joining them all the time. It makes it difficult for the stone supply sector to give simple yes or no answers to whether or not any particular stone is suitable for a project. 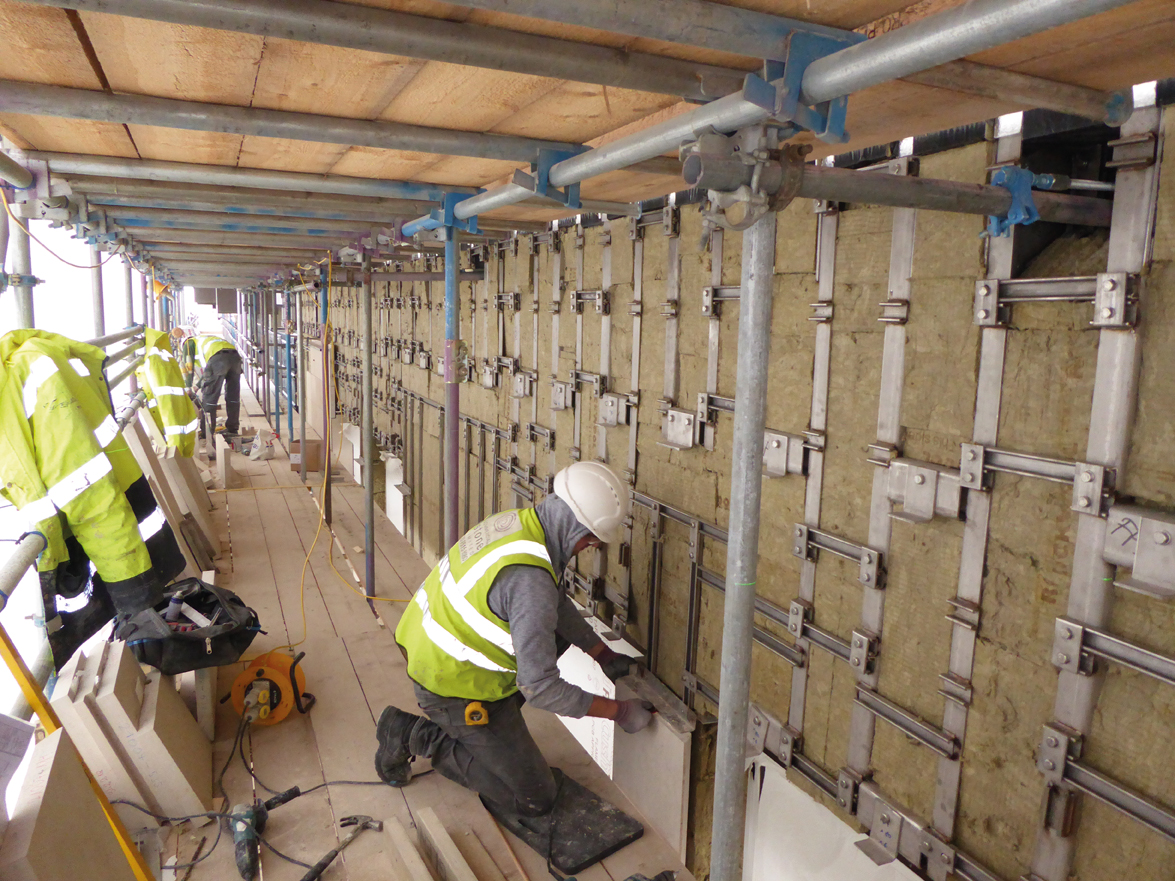 A project at Canary Wharf where Harrison Goldman designed an exoskeleton in 6mm steel to hold the Jura limestone cladding.

Some companies, including consultants, will test stone (or advise clients to have it tested) and then simply present the results, which often mean little or nothing to architects, developers or even engineers. One of the great strengths of Harrison Goldman is that the company actually interprets the results and is prepared to say whether or not a stone is suitable for use in a particular way for any specific project.

Of course, the answer is often not a simple ‘yes’ or ‘no’. A stone might make an ideal cladding for a 20-storey office block… IF it is a certain thickness, in elements of a certain size, fixed in a particular way and subjected to a testing regime throughout the project to make sure the properties of the stone do not vary (which they can from any quarry).

Harrison Goldman will explore value engineering solutions. They will do the maths to see if stone thicknesses can be reduced. If it can, less steel or aluminium can be used for the fixings, which Harrison Goldman will also specify and/or design. Lighter cladding can produce materials savings for the rest of the building all the way back to the foundations… as long as Harrison Goldman has been consulted early enough in the process.

Harrison Goldman will also visit quarries, design the stone detail from architects’ drawings with cutting lists for stone producers to ensure the stone will stay on or in the building. 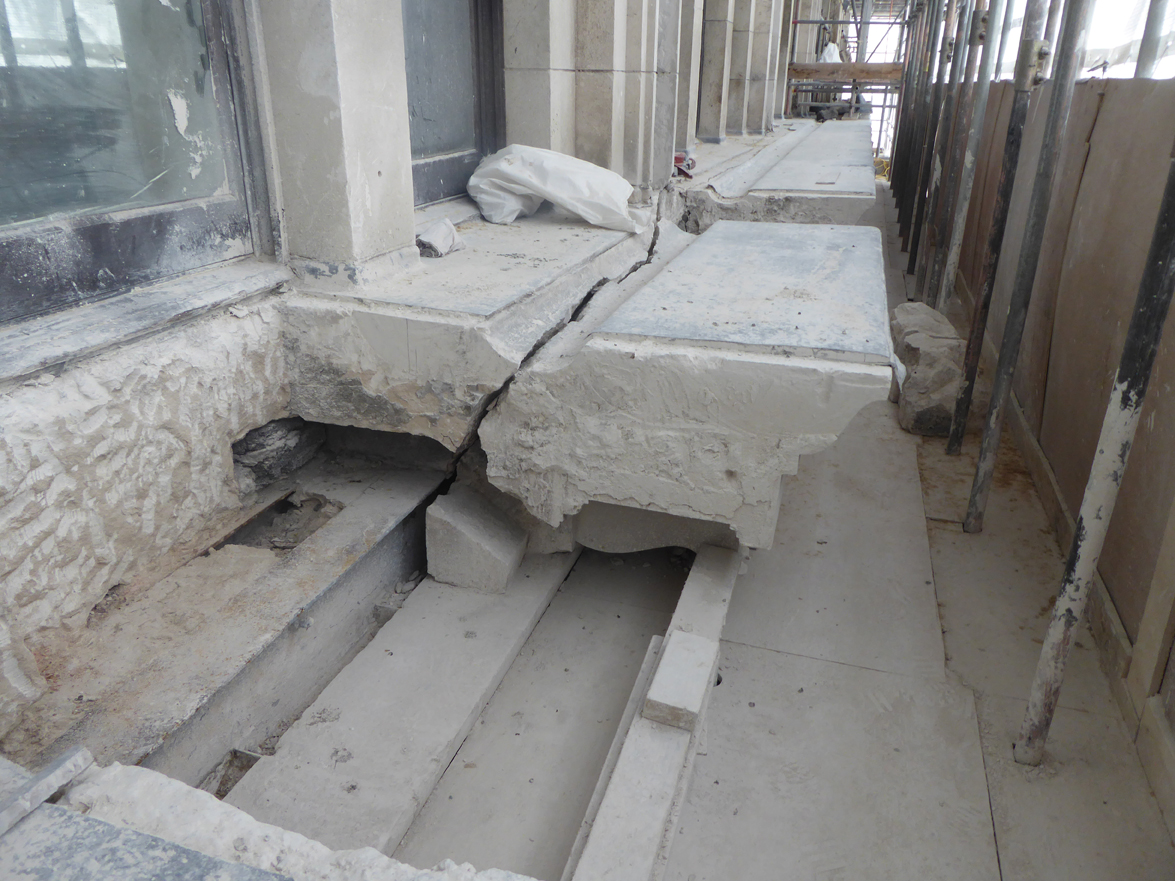 When old masonry in buildings is disturbed for alterations to be carried out the release of tension in the stone can have catastrophic results, for which it is advisable to be prepared.

Peter Harrison has now retired from the consultancy. He might be indefatigable but he no longer wanted to be involved in the day-to-day business of Harrison Goldman, so stepped down as a director and Chairman of the company last year, a few months before the conclusion of his two-year term as President of EuroRoc, the confederation of European stone bodies (including Stone Federation Great Britain, of which Harrison Goldman is a staunch supporter).

Although Peter has left the consultancy that bears his name, he is still working, but now independently so he can pick and choose the projects he wants to get involved in, some of which are with his old company.

Mark Goldman decided that Peter’s departure was an opportune time to update the company logo, although the trading name is retained because it is well known and respected.

The company has 30 projects currently active, mostly in London but including work in Dublin and for ‘Oxbridge’ colleges. Harrison Goldman’s specialist niche has always offered it some protection from economic fluctuations by enabling it to be selective about the projects it takes on.

Mark Goldman trained as a structural engineer when he left school and after 12 years with Harris & Edgar joined the once dominant Stone Group in London. It was a large company with expensive overheads that became a casualty of the recession at the start of the 1990s. The fall-out from its collapse spawned a number of well known specialist stone and conservation contractors… and Harrison Goldman.

“There was a gap in the market because of the demise of the Stone Group,” says Mark.

In those days he worked on a drawing board rather than a computer, like the majority of the architects and just about all the stone industry, even though the first version of AutoCAD had been released a decade or so earlier.

Mark started learning about stone when he was with Harris & Edgar. He was the company’s export design manager and spent a fair amount of time in the rapidly developing Middle East market. “Everything there was stone and I designed a lot of fixings for marble and granite cladding and even consulted for flooring sometimes. I learnt a lot about stone there.”

Having spent the 30 years since then working predominantly with natural stone, including being involved with Peter in the creation of many of the British and European standards for using stone in construction, he could now write a book about it.

If he did, it would start by imploring designers and developers to think about the stone early on in their deliberations. Too often Harrison Goldman is consulted too late in the construction process, when it is suddenly discovered the stone cladding is not going to work as intended.

It is normally possible to find a way round problems, but by that stage correcting them is likely to be expensive because it could well require some imaginative solutions only possible with the bespoke production of stone and fixing elements. If the stone cladding is addressed at the design stage of a project it can often be value engineered to save time and materials on its installation.

Some companies and well known institutions have learnt the value of asking Harrison Goldman to design the solutions for bathrooms, flooring, corridors and receptions in their developments so that they can receive that value engineering and the stone element, at least, will not fail as long as it is installed properly. Others use the consultants for condition surveys.

Not that all Harrison Goldman customers are building clients, architects or developers. The stone industry itself also uses the specialist design skills of the company to turn an architect’s concepts into something buildable. Sometimes the client will tell a contractor to work with Harrison Goldman. “It’s an interesting split,” says Mark.

One example of where Harrison Goldman was called in by a specialist stone contractor is on a project in Canary Wharf in the east end of London. There is a six-storey tower clad in 50mm thick Jura limestone, mostly in panels of 800 x 600mm, that is 300mm out from the floor plate to accommodate the insulation required. Harrison Goldman was approached to design a system to hold the stone after the structure had already been erected.

It took a lot of work, whereas relatively modest changes to the concrete on the frame when it was being designed would have made it a lot less expensive.

Harrison Goldman designed a system to fix the stone using 6mm steel (to limit deflection rather than stress) and gave it to the client, who went to  Stainless Steel Fixings in East Grinstead to have it made.

John Sharman says: “You get a façade consultant working for the client saying ‘this is what we’re doing’ and producing a few stick diagrams and when a contractor comes to build it he has to make it work as part of his design-and-build contract. But because of the increasing size of cavities for insulation and fire requirements, especially since Grenfell Tower, a lot of specifications are not really practical.

“At Canary Wharf, because of the very limited concrete structure, we had to create an exoskeleton to utilise what mounting points there were to tie it back to the main frame.”

Another project Harrison Goldman worked on was the steps cascading inside the entrance to the O2 dome. They are not symmetrical and are on a radius. The multiple intersections between sloping, falling and curved steps and copings was a challenge. The consultants’ job was to ensure the stone design complemented and enhanced the architect’s vision for the feature, which meant a lot of bespoke pieces of stone.

The consultants also helped deliver the ‘icicles’ at the entrance to the first floor Icon shopping mall of the O2. Harrison Goldman design manager Sofia Prifti helped the stone contractor to achieve the waterfall effect the designer had envisaged.

At a project in Grosvenor Street, Harrison Goldman worked on the specification of the brick and Portland limestone to tie new work in with an existing building, including specifying the cleaning of the existing brickwork and stone.

There are literally thousands of examples of buildings, including many award winners, where Harrison Goldman has assisted with its consultancy.

“As consultants, our job is to ensure that the vision and intent of the architect or other client includes the right products to use for the purposes proposed.

“We’re not architects. We don’t design buildings; we’re not involved in concept aesthetics. We leave that to the architects. What we do is translate their ideas into practical solutions that can be built. We’re the marzipan that sticks the icing to the cake.” 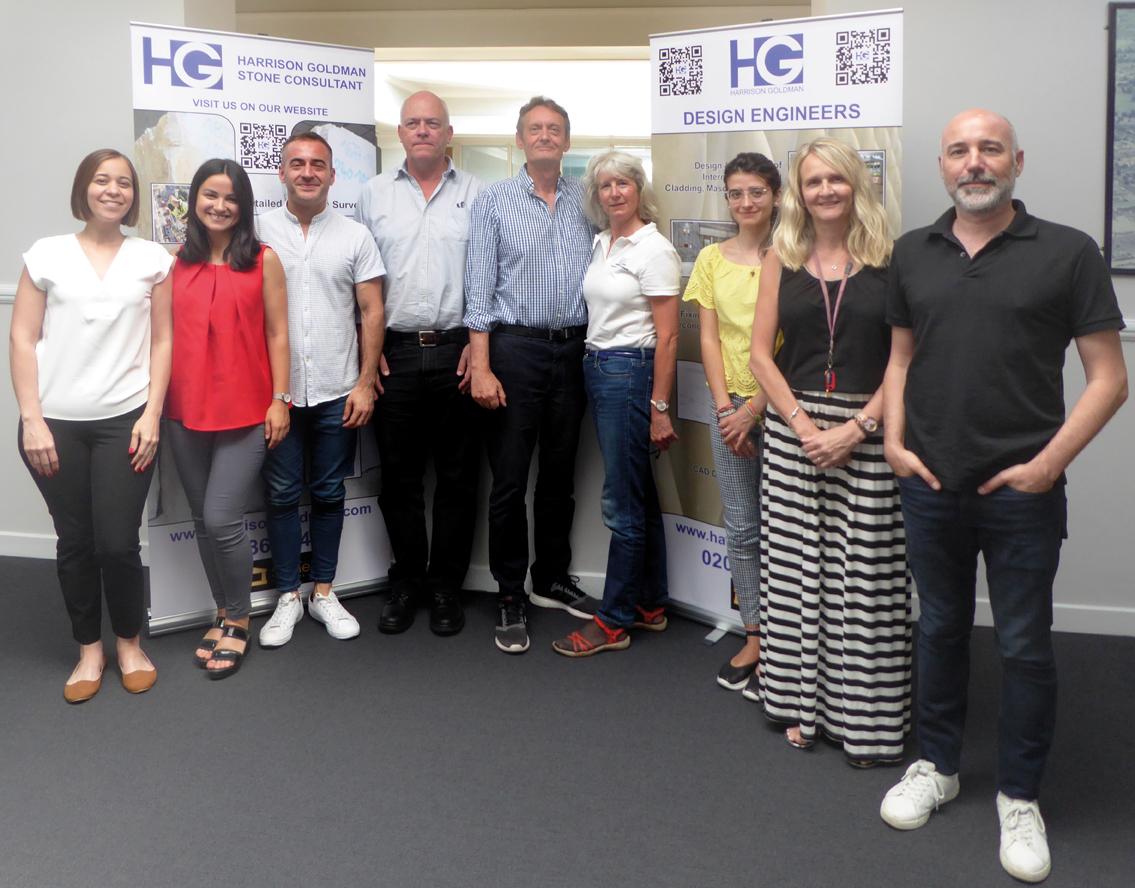