The Worktop Fabricators Federation, introduced in Natural Stone Specialist magazine in December, is being launched softly on 17 February and officially at the KBB exhibition at the NEC in Birmingham 1-4 March. Here the five men behind the Federation explain their aims for it.

WFF is now inviting all fabricators interested in joining to visit its web page in order to register their email address and receive further information ahead of the launch of the organisation at KBB 1-4 March.

The worktop fabricator market is dynamic. It is the fastest growing sector of the ‘stone’ industry – and stone is in inverted commas because much of the growth in the sector lately has come from man-made mineral-based products rather than natural stone.

The worktop market was established with granite, but first quartz and lately porcelain and sintered products have been instrumental in its expansion, with the makers able to promote their brands with substantial marketing budgets to drive demand.

That mix of materials is one of the reasons five worktop fabricators in and around London have got together to create the Worktop Fabricators Federation (WFF).

It was an idea that started to take shape during a visit to the factory of one of the leading  makers of quartz (all the major manufacturers invite groups of fabricators to visit their factories from time to time).

Among those on this particular visit were Andy Phillips of Affordable Granite in Surrey, Mark Mills of Stone System of London in Woking, Mem Zekayi of Granite UK in Hertfordshire, Robert Jay of Prima in north London, and Simon Souter of LBS in West Sussex. Between them they have more than 120 years of experience in the sector.

The trip gave them the opportunity to talk among themselves about issues affecting their businesses, such as cheap ‘cowboy’ competition operating mainly from the backs of vans and a lack of industry-wide working practice, including health & safety. Inevitably they discovered they had a lot in common. But more than that, they discovered they had each found solutions to various issues, some of which they shared to mutual benefit.

“On the trip we were saying how good it was for us, as business owners, to meet up,” says Mark Mills.

The stated aims of the Worktop Fabricators Federation are to promote professionalism, best practice and fair trade in natural and engineered stone worktop fabrication and installation and grow the market for stone worktops through reputable fabricators.

Robert adds: “We had developed this isolated model of working but we have to move on if we’re going to increase our 5% share of the worktop market.”

Simon adds: “There are different businesses within the stone industry. We’re trying to separate what we do and take away the quarries and architectural masonry side.”

They had a vision of a new Federation that would bring the various interests of the hard surface worktop market together – the product manufacturers, the makers of tools and consumables and the fabricators.

At the same time, it would help differentiate the fabricators that have their own factory workshops, templaters and installers from the two-men-in-a-van teams that do not always offer the same high standards as larger companies.

There are about 1,100 stone fabricators with factories in the UK. Some have their own showrooms, but even those that do often work with other kitchen showroom companies as well.

Operating a factory brings with it the issues of employing a workforce, with all the costs associated with that, not least of which are to do with health & safety.

The Health & Safety Executive (HSE) has for many years identified the stone industry as a risk sector with some of its materials, including granites, quartz and porcelains used for making worktops, as having a high silica content that can lead to silicosis and cancer when inhaled as respirable crystalline silica dust.

HSE also highlights the risk of vibration injuries such as HAVS and carpel tunnel syndrome from using power tools for sustained periods, crush injuries from falling slabs, collisions with moving forklifts, and the potential risks of working with machinery such as bridge saws. “It’s a big challenge for us,” says Mem.

By ‘us’ he means all worktop fabricators, which is why one of the early moves of the WFF is to use a specialist company called Peninsular to deal with employment and health & safety issues for WFF members.

“They are offering a greatly reduced monthly charge for members of our Federation to look after these matters,” says Mark. “They will do a risk assessment and put everything in place to comply with the regulations.”

WFF also wants to work closely with the Health & Safety Executive (HSE) to develop policies for safe working practices and to let members know what those policies are.

The new products the industry is using, such as Dekton, Neolith, Lapitec and others, have also presented their challenges to fabricators, just as quartz did in the early days. Finding out how each other had resolved the issues was one of the benefits they discovered on their initial factory visit.

It was also one of the reasons they wanted the manufacturers of those products and the tools used to work them to be involved in WFF.

“It’s an industry-wide problem and we felt it was only by working together that we could solve it,” says Robert. “We want to make sure when a product is launched we don’t have any issues with it. We would really like the manufacturers to come to us before they launch a product.”

They were also keen to keep the membership costs as low as possible and inviting the material and tool manufacturers to support the organisation would help them to do that.

Cosentino (which makes Silestone and Dekton), Caesarstone, Neolith and tool company Stonegate are among those that have offered their support so far. WFF hopes to end up with half-a-dozen or so supporters all together.

There will be no obligation for WFF members to buy the sponsors’ products, but the sponsors will be able to use the Federation’s website to reach members. WFF hopes they will use the facility to present product information and provide guidance on using those products.

The subscription for fabricators to join the WFF has been set at £500 a year, although the cost of joining the or-ganisation might be more than that for some companies because there will be minimum requirements of standards to be met so that a company displaying the WFF logo is recognised as working to the highest standards.

That way, being a member of WFF will come to be recognised by architects, designers and the general public as a sign that the job will be carried out by a legitimate, reputable professional.

“We would love to educate purchasers to buy from a WFF member,” says Andy.

Their aim is to attract a membership of about 500 of the best worktop fabricators in the country and see the logo displayed on all their websites and their premises so it becomes a recognised sign of quality. When the Federa-tion is established as the voice of the industry, the aim is also to talk to organisations such as the architects of RIBA and the builders of the NHBC.

And when the membership has grown sufficiently, which the founders hope it will do quickly, the Federation will be given a regional structure to make it easier for companies to talk to fellow fabricators in their particular parts of the country.

Below. The founders of the Worktop Fabricators Federation. They are (left to right): Simon Souter, Mark Mills, Andy Phillips, Mem Zekayi and Rob Jay. 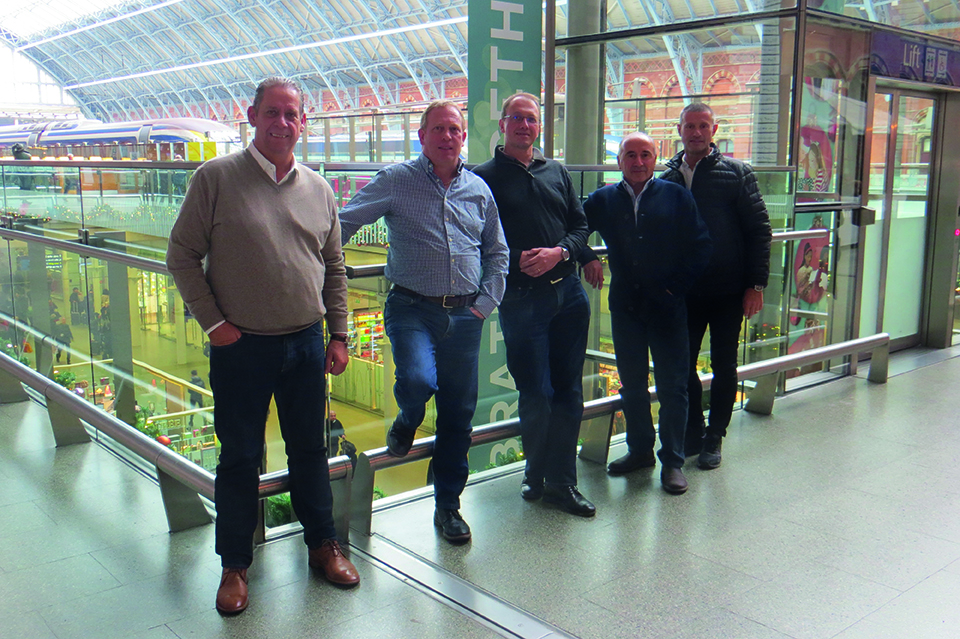