He succeeds Marcus Paine, the Managing Director of Hutton Stone, who has presided over the Federation since 2019 and throughout the Covid pandemic lockdowns of 2020 and 2021. The handover took place at the members event in a private room of 1 Lombard Street in the City of London on 18 November.

Chris set out on his career when he left school with the intention of becoming an architect, but was put off the idea by Leeds Polytechnic where he discovered he did not have the artistic flair for architecture, preferring the reality of building and construction.

He started work in 1980 as a Trainee Draughtsman at Shackletons of York, working on design and installation projects throughout the UK in marble, granite and stone.

During his career, Chris’s work has ranged from project manager on the marble and inlay package of the largest mosque in Kuala Lumpur to the design, manufacture and installation of high-end residential and commercial projects throughout the UK.

Alongside his experience with natural stone interiors and exteriors, Chris has also managed the quarrying of British stones, including Mandale Fossil limestone from Derbyshire, raising its profile among architects.

His expertise of interior and exterior projects, with British and international stone supply, makes him an ideal President to lead the Federation’s diverse and varied membership, which covers the whole range of the use of stone in construction, architecture and landscaping, for new build, RMI and heritage.

Chris says that during his period in office he aims to lead the continued growth of the Federation's membership and its influence, because he is a firm believer that the natural stone sector is stronger when the companies involved in it stand shoulder to shoulder.

He will ensure the Federation continues to be well represented on the various British Standards committees and calls on all members to play their part in supporting and participating the activities of the Federation.

Chris has already helped to drive forward the Federation's Interiors & Surface Materials Focus Group, demonstrating his ability to gather people around a common cause and draw on their expertise to the benefit of the Federation as a whole.

The Members Event marked the end of the extended Presidency of Marcus Paine, who owns Hutton Stone Company in Berwick-upon-Tweed on the Scottish borders. On handing over the chain of office he spoke of his time as President.

The Covid pandemic had curtailed many of the activities that would normally be associated with being President and, as Marcus noted in his summing up of his Presidency, he could hardly have presided over a more disruptive period – and not just because of the coronavirus. There was also Brexit and, for Scotland, the on-going rumblings of independence.

So much disruption left businesses grappling with a plethora of unknowns and variants, although with business being brought to a halt for the first time since World War II during the lockdown there had also been time to reflect and witness the stoicism and hope shown by people who had emerged as heroes of the pandemic.

The Members Event came close on the heels of the COP26 climate change summit in Glasgow and Marcus said it was clear that the future is inextricably linked with climate change issues. “Now more than ever before we must promote the carbon positive good news story of natural stone,” he said.

Stone had always had to compete against cheaper building materials but now, with global warming being the only game in town, it had an advantage... if it could use it. He said the producers of other materials had been quick off the mark to present themselves in a positive carbon light while stone, as an industry, had yet to get its act together. “This is a defining moment for our industry,” he said. “We must lead the dialogue for our material without fear or apology.”

When Marcus accepted the Presidency of Stone Federation in 2019 he said he admired many of those who design and use stone and that he wanted to celebrate the diversity of the material. This was key to the message the industry now had to convey, collectively and individually, to the market.

Chris Kelsey thanked Marcus and said it was a great honour to take on the Presidency because “we are stronger as an industry working together.”

Below. Chris Kelsey (left) receiving the badge of office as President of Stone Federation Great Britain from his predecessor, Marcus Paine, during the Federation's Members Event. 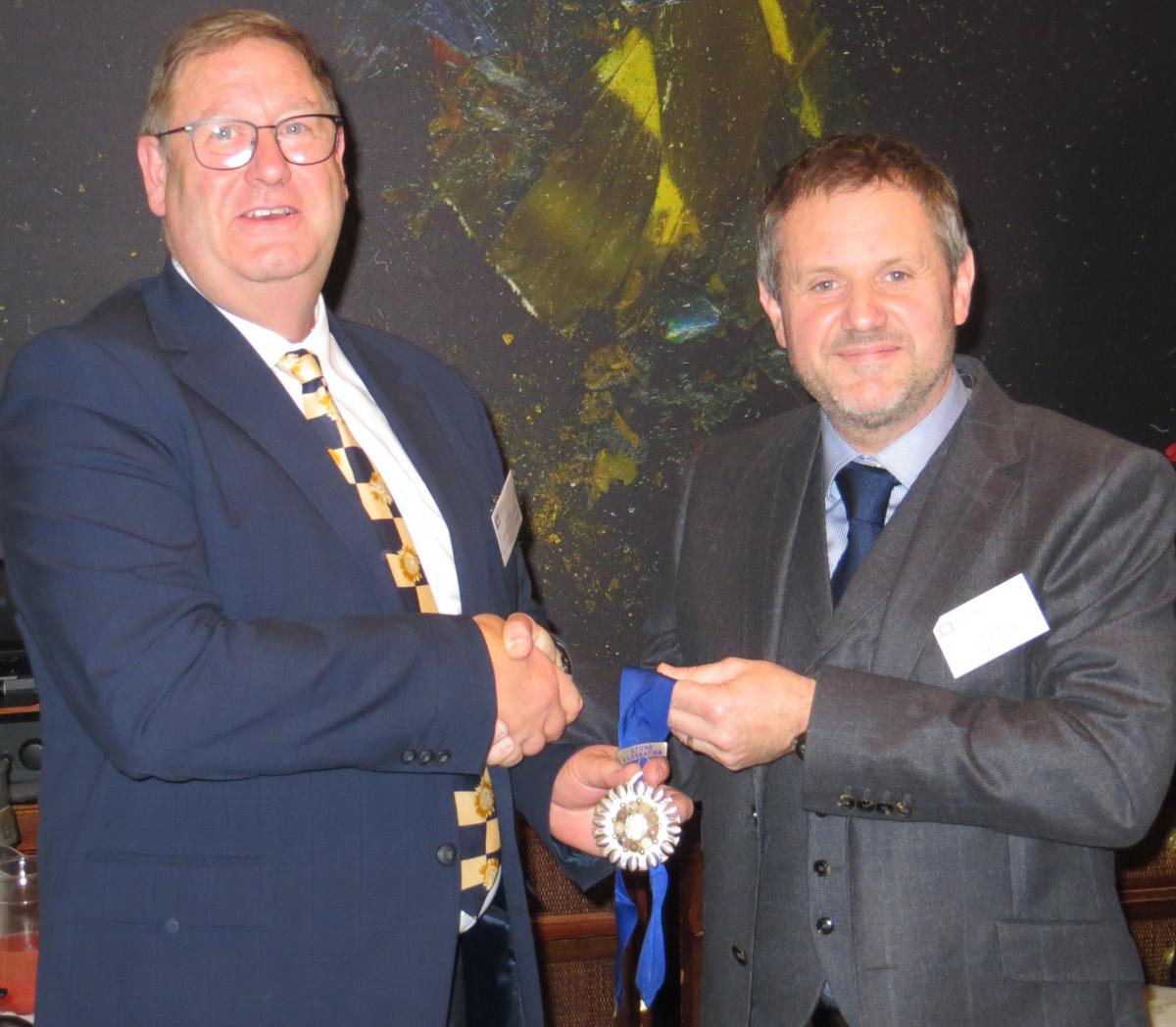