Has porcelain changed the game?

Ever since tile manufacturers realised they could make porcelain slabs as big as those of stone and quartz they have had an eye on worktops.

Stone fabricators paid £500 each to attend a three-day workshop presented by Roberto Colonetti and tile company Porcelanosa in November. Roberto demonstrated how to make a sink out of porcelain and Porcelanosa presented its large format slabs.

The event took place in the workshop and unusual and impressive showroom of Steve Murphy’s Planet Granite business near Coventry. The showroom in a former farm building has daylight flooding in from glass doors and windows illuminating dinosaur fossils and a pool table, as well as kitchen worktops. There are videos to watch and the space is overlooked by the mezzanine offices.

The stone fabricators Natural Stone Specialist spoke to at the event said they had found it worthwhile and expected it to expand the range of products they would be offering.

Roberto made the sink from Atlas Plan, the large format porcelain slab launched by Atlas Concorde in 2017 that is targeted at the market for kitchen worktops, tables and vanity units. It is sold in the UK by The Thomas Group in Manchester. Many fabricators like Atlas Plan because it is less temperamental to work than some of the sintered stones and porcelains.

Is fabrication a separate sector?

As you will see from the news pages in this issue (see page 5) a group of stone fabricators has formed its own federation, which it calls the Worktop Fabricators Federation (WFF). The people behind the new organisation are all fabricators. They spoke to Stone Federation Great Britain (SFGB) before forming their organisation but did not feel SFGB represented their interests outside of natural stone.

Granite and marble has become a small part of their businesses these days as the wealthy quartz and tile manufacturers put a lot of resources behind creating a demand for their products from designers, developers and consumers.

For many years the inclusion of man-made materials been a source of irritation to some of the natural stone producers from the UK and abroad. At the big European exhibition of Marmo+Mac in Verona last year sintered stone and porcelain was excluded, although engineered quartz was still allowed to be exhibited. In London this year the number and variety of manufactured products had reached a point where it was decided to have a separate exhibition, which was called Hard Surfaces.

A popular feature of the exhibition was a display of novel materials by Els Zijlstra, founder and creative director of MaterialDistrict in the Netherlands.

MaterialDistrict presented a 200m2 curated gallery of 136 novel surfaces. The materials featured were chosen for their ability to surprise with features such as unexpected strength, durability or lightness, perhaps, as well as their innovative aesthetics. Some had recycled content, some unexpected components – one was even made of cow dung.

There were products for exterior and interior use created to satisfy both form and function. There were industrial metallic finishes, acoustic lightweight concrete, stone paper, knitted basalt, light weight 3D printed structural support beams, trash terrazzo, surfaces that absorb CO2 and water-absorbing tiles, to highlight just a few. Who knows how many, if any, will make their way into the main stream countertop market.

What about the silica issue?

Quartz has come in for a lot of criticism lately, particularly in Australia and America, as it has been associated with cases of silicosis, which can kill, and painful autoimmune diseases such as rheumatoid arthritis and scleroderma (the hardening of connective tissue in the body).

The culprit is the high silica content of engineered quartz –the manufacturers advertise it as being 90% quartz or more, and quartz is silica.

The latest attack has been on possible VOCs (volatile organic compounds) in the resins used to make quartz. Although all major brands have had their products tested to show they do not contain VOCs and are safe to be used in food preparation areas, in America concerns have been raised over Chinese products that have not been tested. These are also making their way into the UK as more fabricators offer lower price own-brand alternatives to the brands.

Admittedly China is not flavour of the month in America, which has imposed tariffs of as much as 500% on Chinese quartz. And the concerns about VOCs have been raised by the company that carries out the tests, NSF International, which might be hoping to drum up some business from the Chinese. Nevertheless, quartz does seem to be under attack, which has led some to speculate that a whole raft of new non-quartz products is imminent.

Not that porcelain currently fits the bill because it is not silica free, either. Its composition can vary a lot but silica still contributes to its strength and can account for about a quarter of the raw material from which it is made. That is in addition to the silica content of the clay that constitutes about half of the material used to make porcelain and can be as much as 65% silica.

Natural stone also contains silica, of course. Granite, sandstone and slate can be up to around 70% silica, while limestone and marble are normally only 1-2% silica.

Almost any mineral used to make a worktop will contain some silica. Concrete, for example will be about 30% silica because although the cement is made primarily from limestone, sand (silica) and gravel (more silica) is mixed with it to make the concrete.

However worktops are going to be made, it is likely the people making them are going to need to be protected from breathing in silica dust.

Even wet cutting with water guzzling CNC machines offer no guarantee of a completely safe environment, although it will be a lot safer than dry cutting.

The Health & Safety Executive (HSE) has this year been carrying out more tests on silica levels in the sprays from these machines and found it to be well over the legal limit of 0.1mg per cubic metre of air on all the machines it has tested.

There have been plenty of new ranges launched by the leading producers this year and you can be sure there will be more next year. There are also likely to be even more large format porcelain manufacturers entering the UK market (presuming some reasonable outcome of Brexit and the world economy does not go into recession).

It was not just being able to make large formats that brought porcelain in to the worktop sector, it was also developments in printing that enabled realistic-looking stone patterns to be produced without too frequent duplication. And because the design is only printed on, it is quick and easy to change.

There are plenty of predictions for worktop trends in 2020, including 10 from Cosentino, the market leader with its Dekton, Silestone and Sensa factory impregnated granite.

It sees white marble continuing to be widely popular along with chic ‘industrial’ looks in the right urban settings and some wood finishes. It believes thinner worktops are becoming more popular (which means sintered / porcelain) with big islands (from jumbo size slabs because people don’t like joins) that have waterfall ends. It predicts splashbacks will go further up the wall to heighten drama as well as being easy to clean. You can read the whole list on Houzz at bit.ly/houzztop10.

Below. There were 136 novel surface developments shown in the Innovation Meets Design gallery presented by MaterialDistrict at Hard Surfaces in London this year. 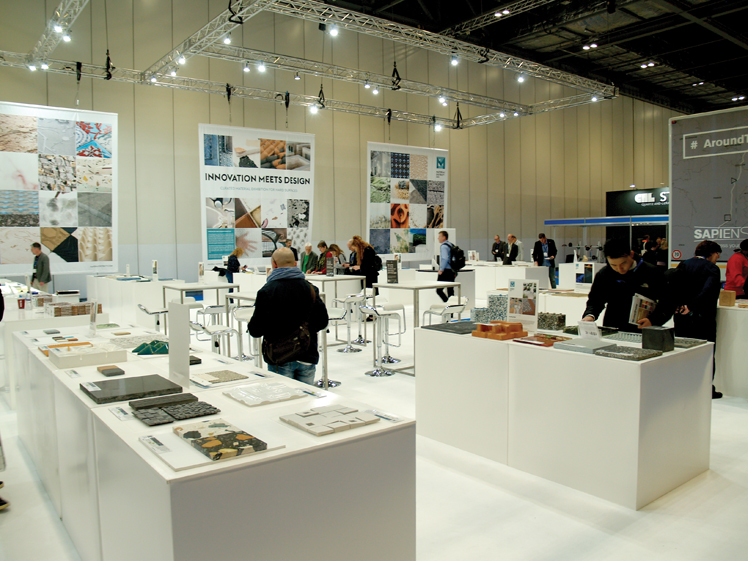