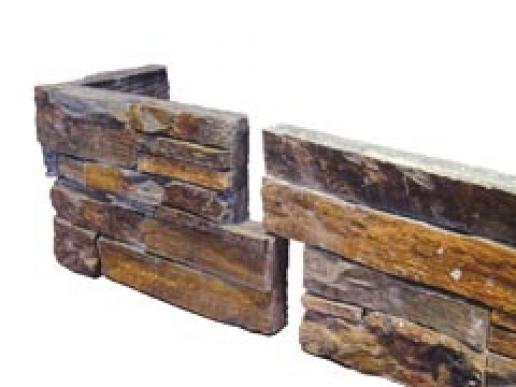 Adrian Phillips of Black Mountain Quarries (BMQ) in Pontrilas, Herefordshire, has set up a new company to begin marketing a product called Z-Clad in January.

Regular readers of this magazine will have seen the product on these pages before, most recently in the March issue when we reported that it was still under development.

Adrian has put a lot of effort into making sure Z-Clad is right for the British market and is now happy that the product, which has already proved popular among self-builders, is ready for the mass market.

The ‘Z’ shaped panels contain pieces of natural stone set into a concrete backing that gives them a flat back so they can simply be stuck to a block wall (using Ardex Flexible Adhesive or something similar). Above 3m a mechanical fixing is also used to comply with Building Regulations. The ‘Z’ shape disguises the joints so the finished wall looks as if it has been hand set using natural stone. At the moment the finishes are of foreign stones, although Adrian hopes to introduce a range with indigenous stone facings.

Skilled bricklayers can fix as much as 40m2 of the walling in a day and even competent unskilled workers and DIYers ought to be able to manage 20-30m2 a day.

“Basically, all you need to know is your three times table to be able to get the right amount,” says Adrian, because three boxes of the material make a square metre. He is currently having a professional video made showing how to use Z-Clad, although he believes it is so simple it will prove popular in builders merchants and DIY outlets.