How stone can reduce carbon in the built environment 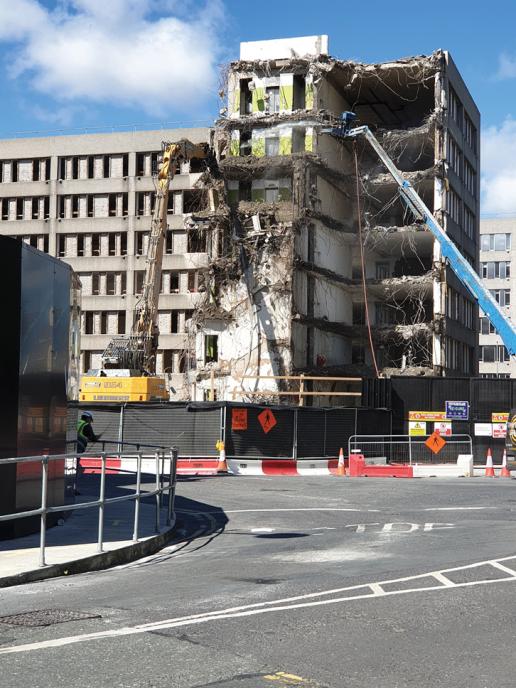 A perfectly good late 1970s building being demolished, losing an enormous amount of embodied carbon. This building could be anywhere. It will probably be replaced with a construction using concrete, steel and glass, the highest offenders in the carbon ranks.

As global temperatures continue to rise, our planet faces one of the simplest yet most difficult problems: reduce the amount of carbon emissions or risk irrevocable and deleterious changes to our world.

The building and construction industry currently accounts for 39% of carbon emissions worldwide (Adams et al, 2019), which presents a prime opportunity for reducing carbon emissions at a significant level.

In the built environment, there are two main measures of carbon emissions: operational carbon and embodied carbon. Operational carbon is carbon that is released from energy consumption associated with normal day-to-day operations of a building (lighting, heating, cooling, automatic doors, lifts, escalators). Embodied carbon is carbon associated with processing and manufacturing building materials, including carbon emissions from transporting raw and finished goods to factories and sites and emissions from refining or processing raw materials.

Frequently, only operational carbon statistics are presented (because these tend to be easier to measure than embodied carbon levels), which presents a skewed picture of the current state of our buildings – carbon figures that exclude embodied carbon can be underestimated by approximately 30% (Duffy et al, 2019).

Embodied carbon values are often more difficult to calculate due to the complicated and often convoluted processes of taking raw materials from the earth and eventually supplying the finished construction materials to building sites (Sansom & Pope, 2012). In recent years, substantial work has gone into determining the embodied carbon for common construction materials like steel, concrete, glass and timber. Sources like the Inventory of Carbon and Energy database by Circular Ecology present embodied carbon for a wide variety of common building materials.

In the stone industry, less information is available on embodied carbon values for different types of stone, despite stone’s advantages for green buildings.

Stone is a naturally durable material with high strength characteristics and is applicable in many different building sectors, from new build to maintenance of historic and heritage buildings. It also has naturally lower embodied carbon than other common construction materials (Crishna et al, 2011) because, unlike steel or concrete, it does not need high temperatures or create chemical reactions that release carbon dioxide during production (Adams et al, 2019).

An up-and-coming stone in the green building world is Valentia Slate. Sourced from Valentia Island off the south-west coast of Ireland, the quarry has recently re-opened. The stone is processed and finished at the quarry site, further reducing the embodied carbon. The slate is extremely durable, which minimises the need for replacement. It also has the bonus, like other stones extracted in the British Isles and used for local projects, of cutting transportation carbon levels compared with stones sourced from Asia or South America.

The most common practice when a new building is needed is to demolish an existing building and rebuild to suit the new requirements.

However, building structural elements (such as foundations and frames) that contain high levels of embodied carbon due to the sheer volume of materials required (Adams et al, 2019), and losing embodied carbon by demolishing these buildings, increases the carbon footprint considerably.

Instead, whenever possible, existing buildings should be considered for adaptation and

re-use. We should be viewing existing buildings as a resource store rather than a resource sink (LETI, 2020).

Many are pushing for buildings to be designed so every element within them can be re-used or recycled as-is or at a new location, rather than being sent to the landfill, to make full use of the embodied carbon already in existence.

The need for more information regarding embodied carbon of construction materials is ongoing in the stone industry and other sectors of construction.

Many actions are possible to promote reducing carbon in construction, including producing Environmental Product Declarations (EPDs) for all building materials and developing accurate methods for accounting for embodied carbon.

Carrig International is working on developing a specific Life Cycle Analysis (LCA) tool for new, existing, traditional and heritage buildings, which will not only evaluate the embodied carbon but also help the construction industry to a greater understanding of the carbon we consume and how we should reduce it.

Reducing carbon emissions is a work in progress but must be undertaken by all concerned in the construction industry in order to avert damage that will be caused by continuing on the current path.

Building traditionally rather then using high carbon materials such as steel, concrete and glass would also help produce low carbon buildings. We could build solid masonry walls again, using low carbon insulation and lime-based mortars, renders and plasters, with timber double glazed windows. Locally sourced stone and timber will have a particularly positive effect on the carbon footprint of a building.