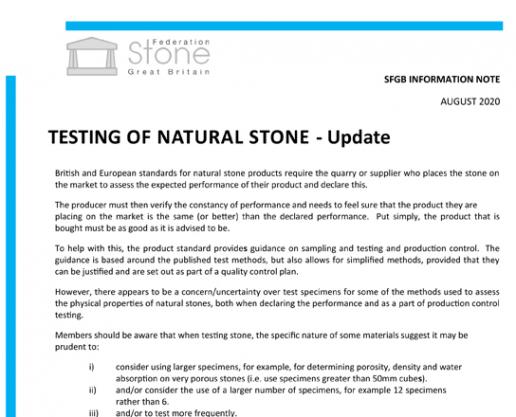 Stone Federation has issued an update to its information note for quarries on testing stone.

Stone Federation Great Britain has issued an update to an information note on ‘Testing  of Natural Stone’.

It says “there appears to be a concern / uncertainty over test specimens for some of the methods used to assess the physical properties of natural stones, both when declaring the performance and as a part of production control testing”.

It suggests simple, regular tests should be carried out by quarries to ensure stones are adhering to the results of more thorough tests carried out to supply data for requirements such as CE Marking.

One person in particular has questioned testing carried out on a few samples of stone that are supposed to represent the production across a quarry without further checking. He is Maurice Rogers, who has advised a lot of architects on the selection of stone for heritage projects. He is, however, not alone.

Maurice uses simple, straight forward tests to determine the density of stones as an indicator of their consistency. He says plotting the results on a graph is essential, so that any sudden variation is immediately obvious.

His methods have been adopted by Stone Federation President Marcus Paine at the quarries he operates in his own business of Hutton Stone on the Scottish borders.

You can read about Maurice Rogers’ tests from a presentation he gave to The Men of the Stones in Stamford as long ago as 2016 at bit.ly/RogersStoneTests. And he had been complaining about the lack of verification of stone supplied by the industry for years before that.

The new Stone Federation Information Note update says it may be prudent to consider using larger pieces of stone (larger than the standard 50mm cubes) for determining porosity, density and water absorption on very porous stones. It suggest using a larger number of specimens, and / or  testing more frequently.

It recommends those placing natural stone on the market should make every attempt to understand the physical properties of their stone. It mentions a simple method of testing involving 100mm cubes of the stone in question that are dried and weighed to obtain a density for plotting on a diagram so any inconsistencies are immediately apparent.

The Federation points out that assessing the physical characteristics of a stone should form part of a quality control testing regime and no single test should be considered in isolation.