Written by Douglas Swan of Douglas Swan & Sons, monumental sculptors in Kirkcudbright in Dumfries & Galloway for more than 155 years, in conjunction with Pam Francis, David’s widow.

David Langham Francis was educated at the Beatrix Potter infant school in Wandsworth and then at the Emmanuel Secondary School in Battersea. He attended the Brixton School of Building gaining a City & Guilds 1st Class degree in carpentry & Joinery, followed by Higher National Diploma in Building Construction & Technical Drawing.

He began an apprenticeship with Higgs & Hill Building Company. During his time with Higgs & Hill he worked on projects at The University of London, Baker Street, Kew Gardens, Epsom, Horse Guards Parade and Nash Terraces in Regents Park.

He joined the family business of Francis Buchanan Stone Masons & Funeral Directors in 1961 and was schooled in masonry by a retired 81-year-old who had been the last Foreman Mason working on the Bank of England.

David and his brother Roger took over as heads of the family company in 1966 when their father died. To supplement their income from the funeral and memorial business they also began repairing, cleaning and making new fireplaces.

Work for large stone companies dwindled in the late 1960s and early ’70s, but artists of that era were looking for a company that could install their work safely, often on stone plinths, and David and his brother identified it as a new avenue for their company to explore. Artists they worked for included David Williams-Ellis, renowned for his mastery of the human form. He is the artist who created the sculpture of soldiers landing on D-Day that is at the front of the Normandy Memorial above Gold Beach, officially opened this year.

Other artists David and his brother worked with included David Wynne, Michael Rizzello OBE, and The Art Bronze Foundry, which introduced sculptor Mike Cooper to the company, famous for many animal statues including Guy the Gorilla. Francis Buchanan Stone Masons supplied Mike Cooper with much of his raw material and he and David became a good friends.

They were also trusted to deal with bronzes, which needed careful handling. Among the many bronzes Francis Buchanan Stone Masons installed was the Fred Perry statue in the grounds of Wimbledon Tennis Courts. In fact, the company installed it twice, because it was moved when rebuilding was carried out in the 1980s. Many Museums also requested the advice and assistance of David and Roger to erect and maintain numerous valuable artefacts.

Francis Buchanan Stone Masons was also an early entrant in the kitchen and bathroom market, making and fitting marble and granite worktops and vanities. Floors formed another part of their work and they replaced the entire entrance floor to Chelsea Town Hall.

Francis Buchanan Stone Masons maintained its memorial outlet and was highly regarded for its work in the days before finished memorials came from China. There are many examples of the company’s work in the three largest and most important cemeteries in London – Brompton, Highgate and Nunhead.

Working with marble took David to Italy to source material to replace marble fireplaces removed and lost during restoration work and David never lost his love for travel. After he retired at the early age of 57 – the age at which his father had died – he decided he would like to see more of the world, but he also wanted to pass on his skills and knowledge of working with stone.

When he retired, David and his wife, Pam, moved from London to Ticehurst near Tunbridge Wells, in Kent. Their travels took them to many parts of the world, visiting exotic places and, of course, studying the stonework and carvings of everywhere they went.

But David also became the Technical Advisor to the National Association of Memorial Masons (NAMM). He developed and improved the NAMM Code of Working practice, represented NAMM on the British Standards committee that produced and amended BS 8415 for memorials and attended many meetings across the UK on behalf of NAMM.

He was instrumental in setting up City & Guilds qualifications through NAMM and he continued delivering and creating training courses in all aspects of memorial masonry, writing many courses himself, teaching, lecturing and giving informal illustrated talks about stone and memorials to people from all walks of life.

In his later years he wrote a monthly column called ‘Grave Concerns’ for Natural Stone Specialist magazine, becoming a popular columnist and answering questions sent in by the trade, cemetery officials and by the bereaved. Eric Bignell, the Editor of the magazine, says: "So sad to hear the news about David. He was always so knowledgable and would deal with enquiries, especially from the bereaved, with kindness and compassion as well as with authority.

"He also answered questions for those in the memorial trade, advising them on all sorts of issues about stones, paints, fixings, lifting, and more, and advised cemeteries about such concerns as the testing of memorials for safety, providing foundations, health & safety, adding subsequent inscriptions and the like. His hands-on experience of the memorial industry meant all his down-to-earth advice was based on the sagacity of having done it. He didn't only know; he knew how. His contributions were a great asset for the magazine and it was always a pleasure to work with him."

Anyone who met David would quickly realise he was an absolute font of knowledge. He was extremely popular throughout the memorial and stone industry and his relaxed, friendly manner made him a pleasure to work alongside.

David was still delivering training courses and taking part in restoration work when he was well into his seventies. He is a great loss to the industry.

Lately he had suffered from poor health. He had survived two strokes and finally succumbed to Covid-19, passing peacefully on 7 August, although his legacy lives on in the many training courses he developed. His skills and methods of working are still being taught today as they are passed on to the next generation of stonemasons.

David is survived by his wife Pam, daughter Sara, son Andrew and his grandchildren Ben and James.

A celebration of the life of David Francis takes place on Thursday 26 August at 3.15 in Tunbridge Wells Crematorium and afterwards at Dale Hill Golf Club for refreshments.

David is pictured below running a training course at Abbney Park cemetery in London in September 2013. 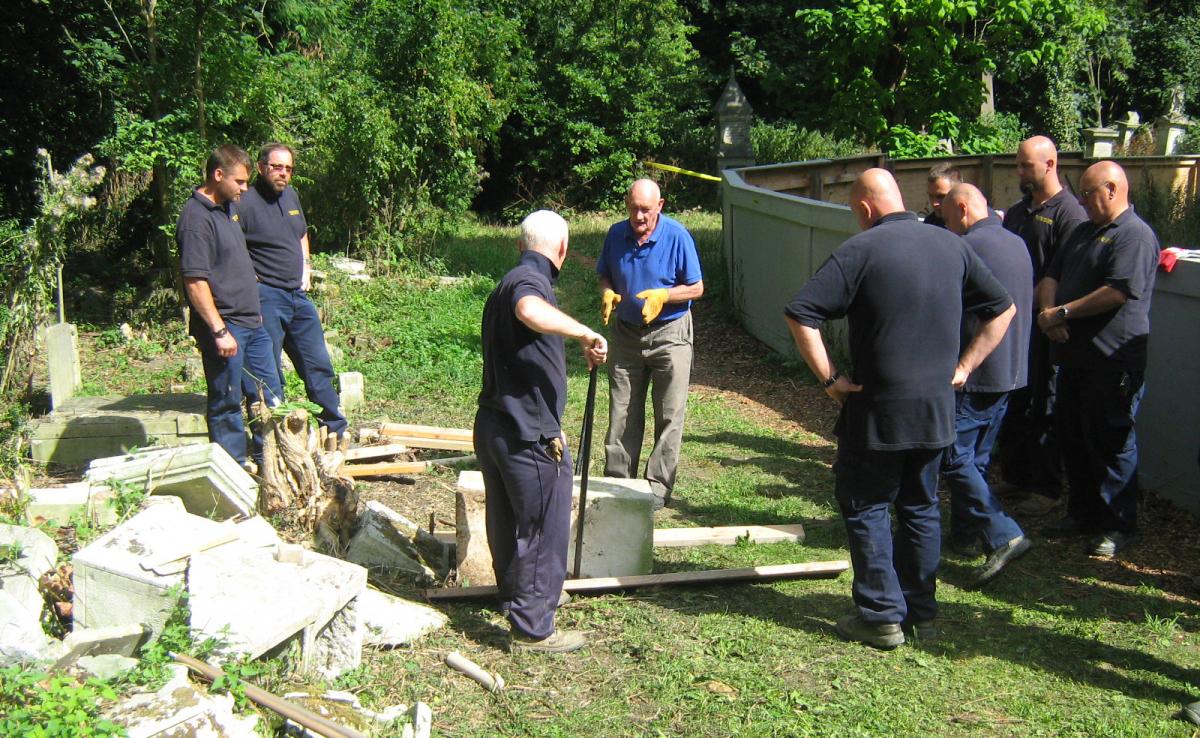