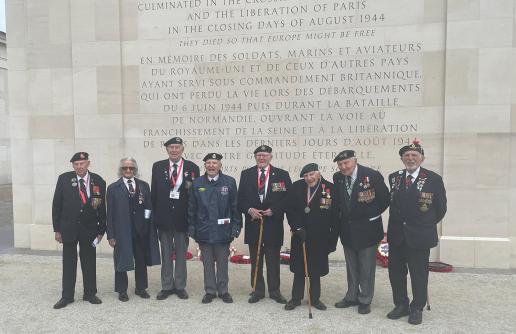 Normandy Veterans at the British Normandy Memorial in Ver-sur-Mer.

D-Day Veterans, whose invasion of Normandy marked the beginning of the end of World War II, have finally been able to visit the splendid British Normandy Memorial in Ver-sur-Mer, officially opened earlier this year (read about it here).

A video of the visit, with a commentary by Nicholas Witchell, the journalist and broadcaster who is a founding trustee of the Normandy Memorial Trust, was posted on the memorial's website in time for Armistice Day on 11 November. Click here to watch it.

The Veterans were not able to be at the unveiling because of the Covid restrictions. Those who have now visited include George Batts MBE, who campaigned so hard to have it built, and Harry Billinge MBE, who single handedly raised more than £40,000 towards the cost of the memorial.

They and other survivors were award the Ordre National de la Légion d'Honneur by the French Ambassador at the National Memorial Arboretum in Alrewas, Staffordshire, where Veterans gathered to watch the unveiling of the memorial by live video link in the summer.

“Wonderful”. “Moving”. “Tranquil”. These were some of their comments at seeing the actual memorial, designed by architect Liam O’Connor and built by stone specialist S McConnell & Sons to commemorate the 22,442 people who fought and died in the name of freedom in the Batle of Normandy.

The Trust is grateful to Lloyds Banking Group for its backing of the Veterans' visit.