British stonecarver Alex Wenham has made a habit of taking part in the European Stone Festival – and winning. And he’s done it again. This is his report from the Festival held this year in Salzburg, Austria, in June.

Alex Wenham is a prize-winning, stonemasonry-trained stone carver based in Oxford. You can see more of his work on his website at www.alexwenham.co.uk and he can be contacted at [email protected].

What is the first thing you look out for when you arrive for the first time in a foreign city? For me (as I suspect for many stonemasons), as well as getting a feel for the architecture and the terrain, the first thing is to try to get a sense of what the local stone is like. It is safe to say (though they have many reasons to consider themselves blessed) that the stonemasons of Salzburg, Austria, are not the most fortunate in this respect.

After a pleasant train journey through forested hills dotted with Alpine houses with their overhanging, chalet-style roof gables, I walked through the city from the station to my Gasthaus in the historic centre. My walk revealed that the oldest buildings (and therefore certainly those built with local materials) are constructed out of a kind of hard, dark puddingstone conglomerate. This stone, to judge by the finish on the oldest doorways, seems impossibly difficult to work any kind of arris into and also weathers extremely badly. In most cases many of the clastic fragments of geological detritus had fallen out of their matrix, leaving a dark, coarsely pitted appearance like that of badly-mixed concrete. When freshly sawn, however, as on the clad facades of a few modern buildings in the city, the stone is far from unsightly.

The clastic inclusions I saw, many of which were bigger than a fist, were a variety of different materials: shelly limestone; brown, white and pink sandstones; veined green marble; and some large nuggets of iron ore.

But this geological interest notwithstanding, the Nagelfluh (as it is called) is hardly the type of stone a participant arriving for the European Stone Festival could notice with equanimity.

The prospect of carving my idea, for which I had taken the trouble of preparing a 1:1 plaster model, in such a stone over a single weekend was a source of rising panic over the course of my walk from the station.

Fortunately, Nagelfluh was not what we were given for the competition.

That evening I made my way to the festival site – a main square in the city between the Nagelfluh cathedral (the quintessential Baroque style employed here for the first time north of the Alps as a kind of ‘Rome of the North’, even before the official imposition of the Counter-Reformation style in the Habsburg territories) and a towering cliff topped off by the imposing medieval fortress that dominates the city’s skyline. 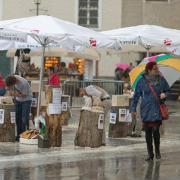 When the weekend’s thunderstorms came (both afternoons of the Festival were blighted by heavy rain), we, the carvers, were grateful of our low-lying position – despite standing in what essentially became a paved river – as protection against the forked lightning.

I was relieved, when I arrived in that square on the first evening, to see several pallets of blocks of soft, forgiving limestone similar to that found in Oxford and the Cotswolds. I was later told that this was a stone from elsewhere in Austria. Three quarters of the Festival’s stones were cut out of this, the remainder from an open-grained biscuit limestone from Junas in the south of France.

I chose a block of the Austrian stone with the smallest (although still considerable) amount of shell content I could find. It turned out to be particularly user-friendly – the shells were soft and workable and not in the least bit plucky.

The Festival was organised this year by the local stonemasonry college at Hallein in conjunction, as ever, with Germany’s Freiburg Technical College for Stonemasonry & Stone Carving, which started the annual competition in 1999. It was, as it always has been, a great success.

There were 155 carvers and masons taking part – a full house, thanks to the new measure of asking for a €55 payment up-front to deter no-shows.

Although many old friends of the Festival were present, this year’s event felt fresh, with what seemed to be a higher proportion of new faces than in other years.

The UK was well represented again, with 25 participants from all corners of the nation from Weymouth to Shetland. Half (well, 12) of the British contingent consisted of Stakhanovite students and teachers from Bath College, who drove through the night in both directions in a minibus packed-in among cases of tools.

Ours was the nation best represented on the winners’ podium, too. Besides myself as winner of the Master Mason category, 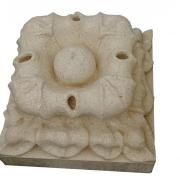 And Thomas Petukauskas, who comes from Lithuania but works in London and was participating under the British Union Flag, won a runner-up prize for his curvaceous sculpture playing on the visual ambiguity between female breasts and buttocks.

My prize was my third win at the European Festival (the others were at Lincoln in 2013 and Freiburg in 2014) and it is the carving with which I was personally most pleased. The theme this time was ‘From the Romanesque to the Modern’ and I carved a capital in a Romanesque style but with a contemporary theme. It had a present-day stonemason (complete with hard hat, ear defenders, site boots, eye and respiratory protection) cutting into a block of stone with an angle grinder. The swirling dust coming off the grinder encircles him, and becomes the capital’s volutes.

I was extremely pleased and proud when I collected my prize – an engraved glass ‘Stein’ tankard – from the mayor of Salzburg. The feeling, however, and the general happiness which pervades the Festival, were tinged this time with a slight melancholy for me, as I wondered whether it might be the last time I would be able to attend the European Stone Festival as a citizen of the European Union.

Over the course of the weekend I took a fair bit of flak from EU citizens of other nations about what was then our forthcoming referendum. I assured them that I would be voting to remain in. This issue of Natural Stone Specialist went to press before the vote had taken place and I can only hope that by the time you read this the whole business is nothing more than an uncomfortable memory. But whichever way the referendum has gone, the mood behind it – populist, nationalist, protectionist fear of migration and globalisation dressed up as more presentable questions of regulation and sovereignty – seems to be putting down roots everywhere in the developed world. Austria itself in May only just avoided becoming the first European nation to have a far-right head of state since 1945.

Perhaps one day I’ll be rounded-up and sent to a camp for having written this. Perhaps I should just go and pour a beer into my new tankard and drink to co-operation, peace and prosperity… and to travelling to the next European Stone Festival without needing a visa.

If you want to join me at the next Festival, it is being held in Kiskunfélegyháza, Hungary, 19-21 May 2017. Kiskunfélegyháza is a town with a population of just 31,000 and some amazing examples of Art Deco architecture. For details of next year’s event keep an eye on www.stein-festival.de/en.

A final word from Bernward Fiedler, who oversees the event from Freiburg Technical College for Stonemasonry & Stone Carving. “It was a great Festival. Every participant enjoyed very much working alongside the cathedral at the foot of the Castle hill. Most of the days were dry and sunny apart from the late afternoon showers. But rain does not put off stonemasons and carvers. I just received a press article from the organising school in Hallein and it said that the City council of Salzburg was very excited to see the Stone Festival in Salzburg for the second time. Salzburg has so many big events throughout the year, but the Stone Festival really is different and creates quite a different atmosphere in town.”