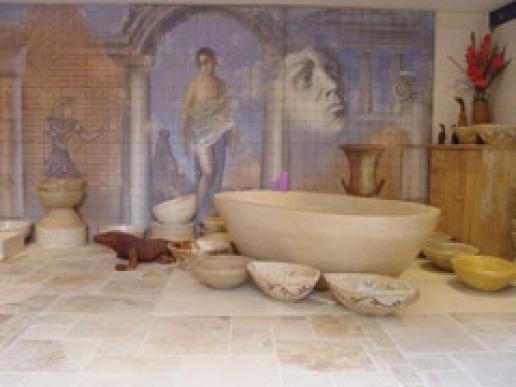 Edward Price’s philosophy towards selling stone is to have lots of it at low prices because even wealthy people like a bargain, especially when the economy turns down. And he thinks choosing stone ought to be fun

Whatever else a visit to the showroom of Price’s Paving & Tile in Snape, Yorkshire, might be, above all it’s fun. You snake your way through corridors that vastly increase the discreet areas of walls and floors available in the 700m2 showroom to show off the range of 120 stone tiles from 22 different countries. And you end up in rooms such as the Egyptian tomb (pictured left) where stone from Egypt is displayed around a Tutankhamun-like mummy.

There is just a touch of Ikea about the experience – once you’re in, you are led along a route that ensures you see everything there is to see. And what there is includes wooden furniture, carvings, planters and all sorts of amusing and unexpected novelties that are not only going to bring a smile to the average visitor’s face but also encourage them to open their wallets.

The showroom – with its stone interiors and hard landscaping, garden products and sandstone roofing slates for the Yorkshire market outside – is a gem, squeezed behind a residential street in a picturesque Yorkshire village in what used to be a garage, where once even aeroplanes were made. One local magazine writing about Price’s showroom described it as “an adventure playground for eccentrics”.

Edward Price, who owns the business, opened the newly designed showroom earlier this year (see NSS June issue) having bought the former garage that houses it four years ago.

Before he made the alterations to the premises he had a small, dark showroom at the back of the building that visitors reached by walking through the rest of the building stacked with stone.

It wasn’t ideal. But even that was an improvement on the position he was in before he bought the garage, when visitors to the four stockyards (which he still uses to hold stock) had to face whatever the weather had turned the bare ground into. As his customers include the owners of some fine, expensive properties, Edward felt there was a certain incongruity as they and their children stepped from their convertibles into the mud.

Price’s also encompass another successful retail model – the supermarket philosophy of pile it high and sell it cheap. At any one time they reckon to have nearly 300 container loads of imported stone in stock at their stockyards.

“I try my best to keep it down, but I can’t. I get bored and go off to Vietnam or somewhere and buy some stuff,” says Edward.

“Every year I visit seven or eight countries. You have to get in before other people do. I’m always looking for something exclusive; something different. And you have to go there. The people who find you are the people you don’t want to deal with. They are the bigger companies that charge too much.”

Edward is not even unduly worried about recession, looking on it as the opportunity that arises every decade or so to buy some cheap shares.

“I’ve more important things to worry about than recession. If we were expensive I would be worried but people come here because they like the prices and the choice. I’m used to working on low margins.”

Most of his flooring sells for £18-25 a square meter. “We’re knocking the ceramic market on the head. I think ceramic is rubbish.”

He has one small room in his showroom displaying what he considers expensive tiles – in the region of £50 a square metre.

But he vigorously refutes any suggestion that his prices are the result of poor quality products. “I won’t buy bad quality stone because it’s not worth the hassle. Every now and again I get asked for commercial quality travertine. I will supply it but I won’t guarantee it. I think it just spoils the market. People have it and it puts them totally off natural stone. Commercial quality travertine should stay in Turkey.

“I also get hundreds of people asking about granite worktops. I don’t want to get involved in it. It’s loud and wet. It’s not my cup of tea.”

Marketing his extensive product range had not interested him much in the past, either. He says every customer sends two more along, which has kept the business growing nicely.

Last year, however, he felt it was time to start spreading the word and advertised in a local newspaper for someone to head his marketing effort. As a result, Joanne Garlick joined the 10 people in the business at the showroom and four stockyards. “We have that many products now it was time for someone to start marketing the business,” says Edward.

Joanne has a fine arts background, but says that during her degree work she had to put on her own show, advertise it and make a pamphlet to go with it. “It’s that creative side of things I’m bringing to the business,” she says.

She has been drawing together the various strands of the business into a coherent identity, tieing together the company brochure and website and producing a regular newsletter for trade customers rather than the ad hoc one that was circulated previously.

She has also been co-ordinating advertising and publicity in glossy magazines. “You don’t do all of this without telling people about it,” she says, “But you have to keep selling as well, so they needed an extra body.”

One opportunity for publicity came from Tindale Towers, an art deco mansion. Price’s supplied more than 1,000m2 of Jerusalem stone flooring, plus Jerusalem stone wall tiles and glow-in-the-dark tiles for the swimming pool. It went on to win a RICS Renaissance Award.

Joanne says: “The owner was working with builders, architects, landscapers, so probably one of them suggested he come here. He just turned up asking for 12,000ft2 of stone.”

Joanne has also been co-ordinating the response to leads from the county shows at which they have exhibited to expand the business geographically.

The events they have attended range from the Great Yorkshire Show to the South of England Show and from Cumbria to the Royal Horticultural Society Show at Malvern. They are the sort of events attended by people with large country houses.

Price’s are willing to supply anywhere in the country and from the docks at Felixstowe where their stone lands they supply straight into London at prices contractors there are delighted with. But most of their business comes from an area within a 100mile radius of their home base in Snape because that is about as far as Price’s three drivers (one is Edward’s Dad) can deliver in a day.

Edward was making concrete paving slabs that were intended to look like stone before he moved into the real thing. He had an uncle living in India who introduced him to some of the sub-continent’s natural sandstone. Edward was shocked by the high quality and low price. He stopped pouring concrete and started importing sandstone. Then came travertine. Then a great deal more.

And next? Always new ranges that will result in new displays in the showroom and a new brochure for 2009. But also possibly even another showroom. “Somewhere it’s not rough,” says Edward. “Cheltenham. Somewhere like that.”